skip to main | skip to sidebar

Draught of 2008
Posted by Cincinnati NAMjA at Sunday, December 28, 2008 No comments: Links to this post

Posted by Cincinnati NAMjA at Wednesday, December 24, 2008 No comments: Links to this post

Why Is Cincinnati's N.A.A.C.P. Against Streetcars?

Today the NAACP's pres Chris Smitherman announced that the city should rethink sinking so much money into developing a street car system which would service Downtown and the University of Cincinnati area.

I hope that there is more to NAACP's opposition that what is stated in the Enquire article. If not, that would mean the the NAACP is opposing a viable way of doing the following for the struggling downtown/OTR area:

1. Linking neighborhoods with a modern, convenient and attractive
transportation alternative.

In many struggling urban areas, streetcar implementation has proven to reduce congestion and parking problems in addition to creating a low emission transportation alternative with environmentally-friendly features.

What is there to oppose....I want to know more.
Posted by Cincinnati NAMjA at Tuesday, December 23, 2008 1 comment: Links to this post

Top Ten Stories of the Year!: #9 Ikea Comes To Town

"Although Ikea's sixth Midwest location and 34th in the United States is still
several months from opening its doors, local officials are anticipating an "Ikea
afterglow" from new retailers coming to the Union Centre area on the heels of
the home furnishing retailer."

Posted by Cincinnati NAMjA at Tuesday, December 23, 2008 No comments: Links to this post

It is now that time of year when top ten lists of 2008 starting inundating our daily life.

So i thought I would throw my hat into the deal.

For the rest of the year, I will be counting down the biggest story of 2008.

#10 Bank Robbing Granny
Posted by Cincinnati NAMjA at Monday, December 22, 2008 No comments: Links to this post

Area 4: Put Your Money To Work

This last and final step may be a bit too late for this year's savings plan, but if implemented in Jan 2009, it may find you well for the next X-Mas season .

All that hard work to save money will do no good if you just go out and blow it all on a new pair $300 designer Seven jeans or your next trip to Cabo San Lucas.

Why not make that extra cash start working for you?

Explore some investment options that will furnish financial returns such as money markets, certificate of deposits or savings accounts.

By no way are these steps a complete and all encompassed financial strategy.

There are several different variables which must be factored into your individual financial savings' equations. But, by taking these baby steps next year's Christmas spending will be more enjoyable for all!
Posted by Cincinnati NAMjA at Sunday, December 21, 2008 No comments: Links to this post

Yesterday morning as I was walking out the door for work, I glimpsed G.W. announcing that he was bailing out the US auto industry with $17.4 Billion with what the cash, I suppose, was laying around to be spent on a rainy day.

According to most economists, this was the best move in order to stabilize our sinking economy, but I am still skeptical.

The only reassurance that I have is that this loan will be unscrupulously monitored, but even still I have misgivings.

Though this bailout is an OK way to spend the money, I have to ask myself is it the best way to spend a few billion dollars?

Sure this plan gives the auto-bigwigs time to restructure, but I can't see how rewarding the gross neglect of ingenuity and lack of foresight of trends and popular thought can move us towards a more economical way of doing business.

Whatever the case, it is a horrible way to exemplify free markets and capitalism which the country strives to protect.
Posted by Cincinnati NAMjA at Saturday, December 20, 2008 No comments: Links to this post

Over the past several years, Cincinnait NMAjA has created a following which has allowed it to grow into what you see today.

The interest has continued to grow which is why, beginning on Jan 2009, Cincinnati NAMjA will have a brand new look and feel.

This site will continue to cater to the downtown Cincinnati city dweller, but will attempt to encompass nationwide news and entertainment in addition to keeping you abreast of the happenings right here in the Queen City.

I look forward to entertaining you in the new year...
Posted by Cincinnati NAMjA at Thursday, December 18, 2008 No comments: Links to this post

Get your mind out of the gutter bois. I am not saying become a hermit and only leave your apartment to go grocery shopping.

What I mean is take a good look at the money which you shell out each time that you have a night out on the town, and see where you can save a little bit of cash.

It may be as simple as passing on one round of drinks or even guzzling down a domestic beer verses the expensive microbrew which you are accustomed.
Posted by Cincinnati NAMjA at Thursday, December 18, 2008 No comments: Links to this post 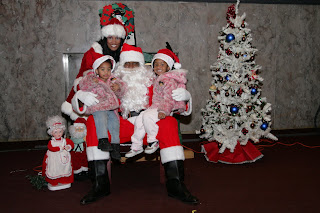 Last Sunday, in the grandiose Bell Event Center, Pendleton Neighborhood Council (PNC) invited children residing in Pendleton to come in and experience Christmas a bit early this year.
For the past few years, PNC funds a Holiday party geared towards the residents of Pendleton filled with craft making and dancing.


The event is topped off with a special appearance oh jolly St. Nick who towers above everyone else at well over 6 feet tall.


Every children leaves with an age appropriate wrapped gift to place under the tree.


I have placed a few pictures from this past Sunday even, but please feel free to visit Pendleton Neighborhood council's website for additional pics of the event @ http://www.pendletonneighborhood.org/.
Posted by Cincinnati NAMjA at Wednesday, December 17, 2008 No comments: Links to this post

Step Two: The Smaller The Better

It's not always the size that matters. Speaking of Netflix as I did in the last step, if you simply cannot live without your subscription, how about cutting your movie delivery from 3 to 1 at a time?

I am sure that the extra two movies will still be waiting for you on your que when you are ready for them. You can also take a good look at your cell phone bill. If you are paying for 600 minutes per month but only use about 250 minutes on average, maybe it's time to switch to a less expensive plan.

Another area to investigate is that of your gym membership, which I know you must have. Ask your gym if there is a way to save on your monthly costs by only paying for a membership to one of the gyms in town instead of having the all inclusive package.
Posted by Cincinnati NAMjA at Sunday, December 14, 2008 No comments: Links to this post

Not too often do I get a chance to grab a weekday breakfast sandwich at a locally owned shop, so today since i woke up a bit early to get my workout in, i decided to make a stop.
Due to my gym being across the river in Northern Ky, yesterday I decided to stop at Mammoth Cafe on my way into work since I have heard such great things about it.

The moment I walked in, the laid back atmosphere, coupled with the smell of java and eggs set me at ease and made me that much happier that I broke out of my old routine.
Mammoth, located in the heart of Newport, KY on the 500 block of Monmouth St. creates a nice reprieve from the usual hustle and bustle of the more commercial breakfast shops.
Mammoth's mix of veggie and meat-eater breakfast fare couple with its variety of joe to choose from make it a great breakfast destination for an early morning meeting or just a singular great way to jump start your workday.
It took me a a few minutes to choose my carnivorous breakfast burrito and was surprised when I was offered my choice of a side item.
This coupled with the little dab of Sriracha which was included in the order has got me wanting to go back for more.
Posted by Cincinnati NAMjA at Saturday, December 13, 2008 No comments: Links to this post

In the mode of holiday savings, I have devised a few simple steps which will ease your pocketbook during these financially trying times.

As promised here is the first installment.

One way of saving a couple of duckets is to go through your checking or saving accounts and take a good inventory of all the automatic deductions that you have established.

Do you really need to spend over $150 a month for your Time Warner Cable? How about your Netflix account? I know that $20 per month is not a lot to spend on three movies at any one time, but when was the last time you visited your local branch of the Cincinnati Public Library?
You know they have videos as well, and they are free. Not only that, they have those things that go on bookshelves.

You could even learn a thing or two in the process.

Cutting these extra expendatures out, even for a month may go a long way during your next visit to Kenwood Towne Centre.
Posted by Cincinnati NAMjA at Wednesday, December 10, 2008 No comments: Links to this post

The last time that our country has seen this much financial distress the American people were getting ready to be thrown into the midst of The Great Depression. During that time, our "traditional" values were a bit more modest leading to the recipe for saving money and surviving the inevitable economic meltdown were more prescribed. Father's working hard and mothers working even harder to make ends meet to feed, clothe and house their abundant amount of children, while stashing the little extra money that they earned wither under their mattress or in their ice boxes were common place.

Today, simply hiding your money away out of sight will do nothing for you in the long run but give cold hard cash when you finally decide to spend it, in some cases even depreciating in value in the process. The money saving methods of the 1920's are just that, depressed, recessed and very much a thing of the past, a relic of a by-gone era. The nation's traditional values have morphed into a plethora open ended opportunities, forging a way to unprecedented economic growth, leading to financial security.

As a gay man living in the Queen City (no pun intended) during the holiday season, I have found that my predisposed love of trend-setting style and sense of entitlement has caused me to forgo trying to save money for the future to make way for the immediacy of now.

It looks as though I am not alone.

A few months ago Harris Interactive conducted a survey that found that about 50 percent of gay adults keep up with the latest styles and trends as opposed to only 38 percent of heterosexual adults.

Over the next week I will reveal four simple ways in which I was able to stretch my paycheck to ensure that everyone of your "fam" (faux and true) is satisfied come the time when St. Nick knocks at your door this year without sacrificing my guilty pleasures.
Posted by Cincinnati NAMjA at Sunday, December 07, 2008 No comments: Links to this post

I have worked long and hard to get this website up and running. It is still in the works, but here it is....

www.pendletonneighborhood.org
Posted by Cincinnati NAMjA at Wednesday, December 03, 2008 No comments: Links to this post

What Did He Say?